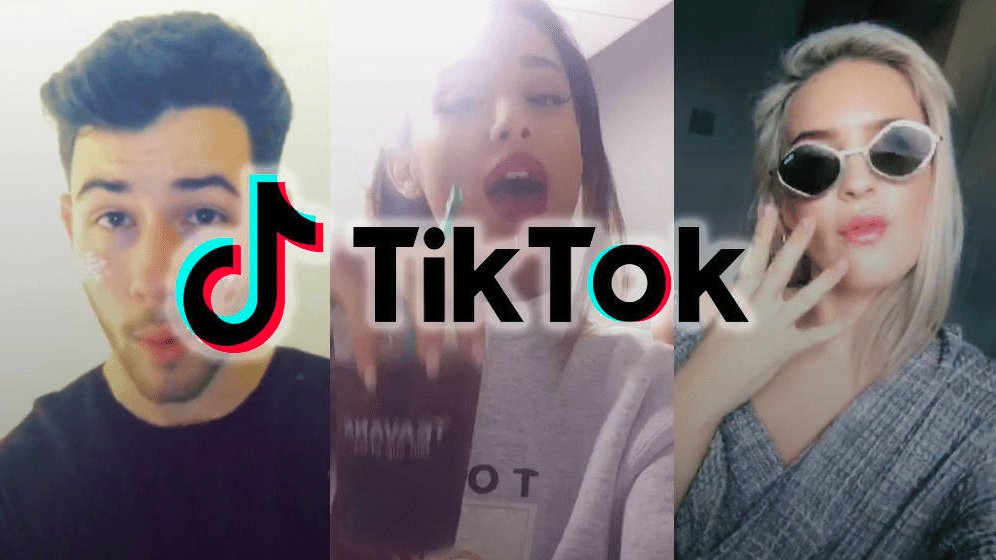 While you might be familiar with the celebrities who come from fame on YouTube and Instagram, famous TikTokers is a whole different playing field. And you may be surprised to know that those quick videos can bring in fame and a lot of cash.

Ready to know who are the best of TikTok creators?

Unlike Instagram and Twitter where celebrities and public figures dominate the platform, TikTok is full of relatively unknown stars in the making. The success of these social media personalities is a sign of the current influencer culture dominating the public sphere.

Who are the most popular TikTok users? They are in their

In March 2020 Charli D’Amelio officially became the platform’s most-followed creator. She is known for putting her own twist on the many popular dance routines created on TikTok and collaborates with many of the apps other popular creators.

Her bio states “Don’t worry I don’t get the hype either.” 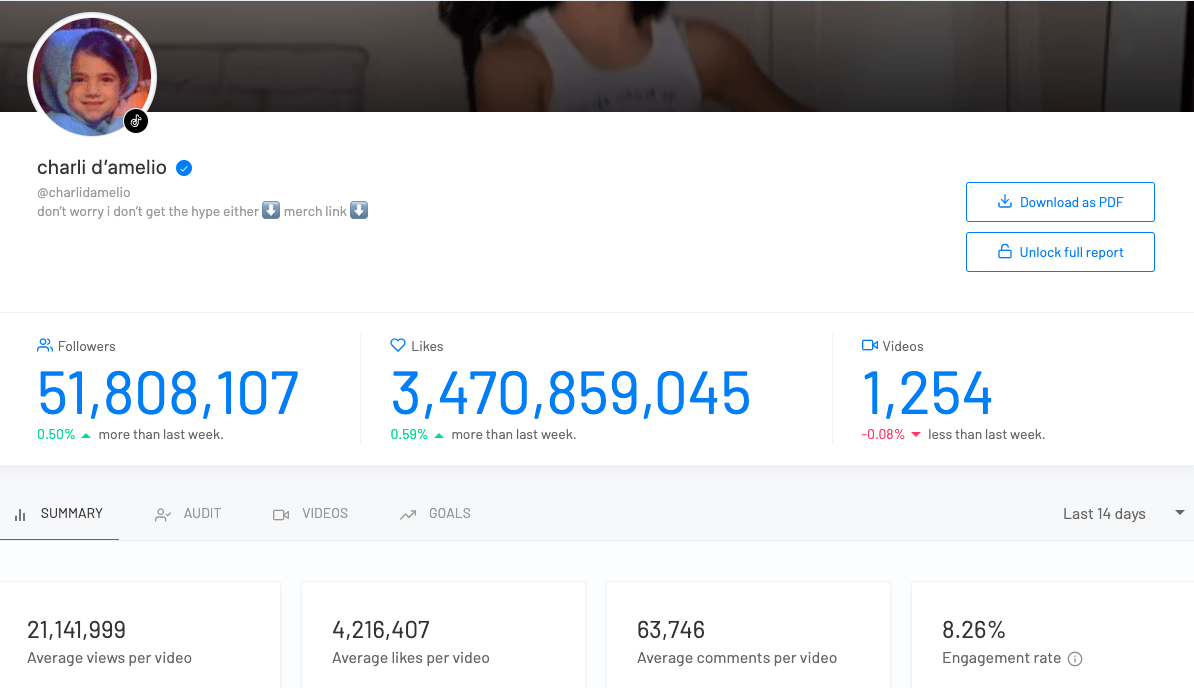 Loren Gray is a singer and social media personality who hails from Pennsylvania, USA.

She is an online celebrity, musician, dancer, and actress, with millions of followers on several social media platforms. She has more than 50 million followers across TikTok, Instagram, and YouTube combined.

In November 2018, she released a new song called ‘Kick You Out’ on YouTube that received over 1.6 million views in just four days.

Loren created her account when she was in 6th grade. She faced a lot of flak from her schoolmates and moved to Los Angeles.

This young celebrity was nominated for the Teen Choice Awards and Shorty Awards. In 2018, she was signed by Virgin Records. Then, she released her first single My Story. The teen sensation, who considers Eminem as her idol, was later signed by Capitol Records. 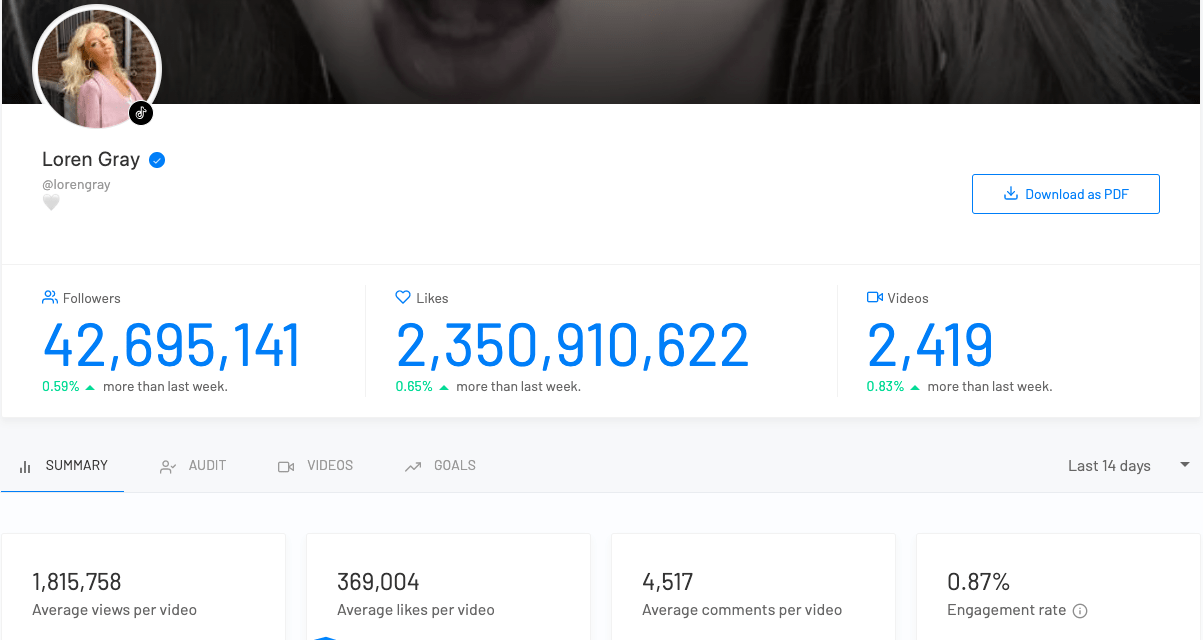 Addison Rae is just a girl who Louisiana, the USA, who likes dancing with her mom Sheri. Their videos become viral and super popular.

Her energetic dance moves and collaborations with other fast-rising stars skyrocketed her into the hall of fame in less than a year with no signs of slowing down.

As an active member of the TikTok Hype House, she has already scored major campaigns with brands like Chipotle and COVERGIRL. 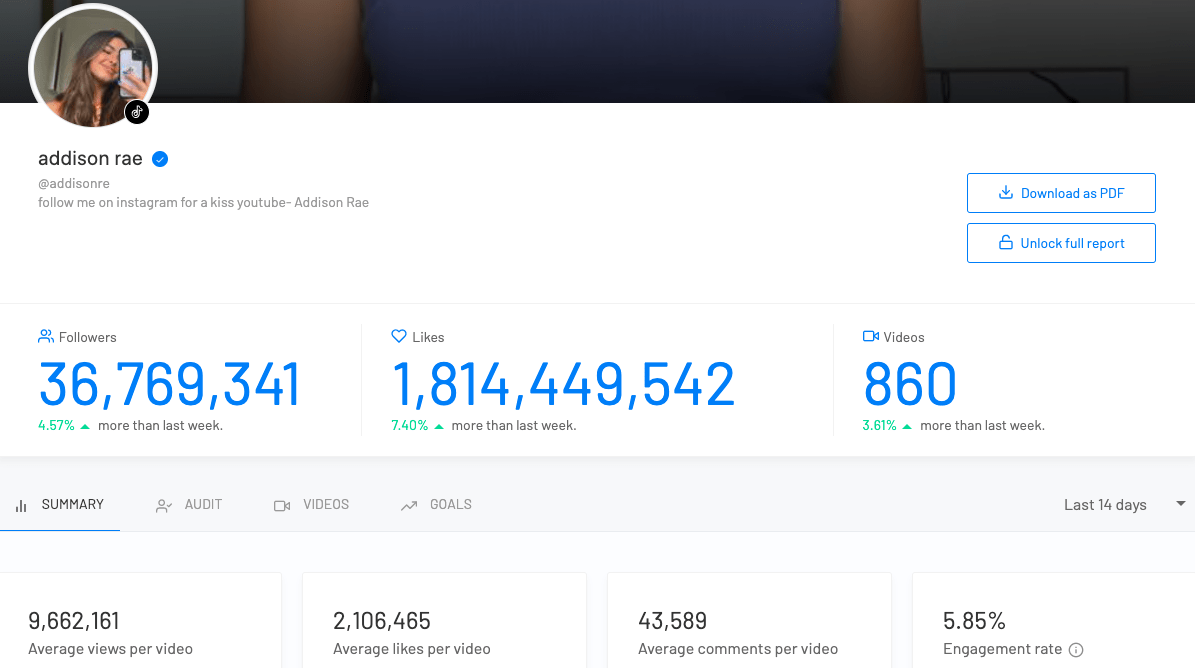 Baby Ariel is an American singer and actress who has a massive fanbase on most social media sites, notably TikTok who started her social media career in 2015.

Ariel Rebecca Martin (her real name) is an 18-year-old girl who has already appeared in two television movies produced by Nickelodeon and Disney Channel respectively.

She was also recognized by People Magazine for her #HackHarassment campaign and was named one of the most influential on the internet by Time Magazine in 2017. Her anti-bullying campaign #ArielMovement became an instant success. Later, she launched an anti-trolling movement to raise her voice against negativity on the internet.

Time magazine named her one of the most influential people on the internet, and Forbes tabbed her a top entertainment influencer in 2017. 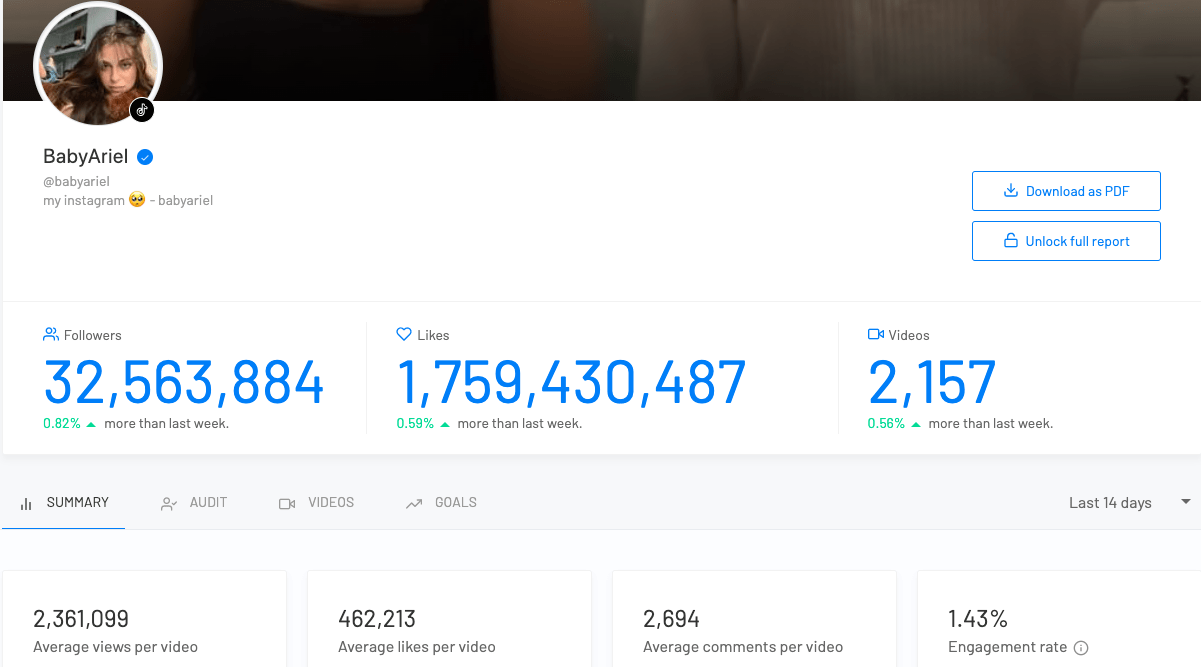 Arishfa Khan is a 16-year-old girl from India who got her start as a child actress at age 9 on a popular television series.

However, she gained a major following for her lip-syncing videos on her account and has since created a beauty and makeup-centric YouTube channel. Her videos often feature fellow TikTok star Lucky Dancer.

Her TikTok followers love her innocent looks and remarkable acting skills. She has made a place in viewers’ hearts with her entertaining lip-sync videos and dance moves. She aspires to become a mainstream Bollywood actress. 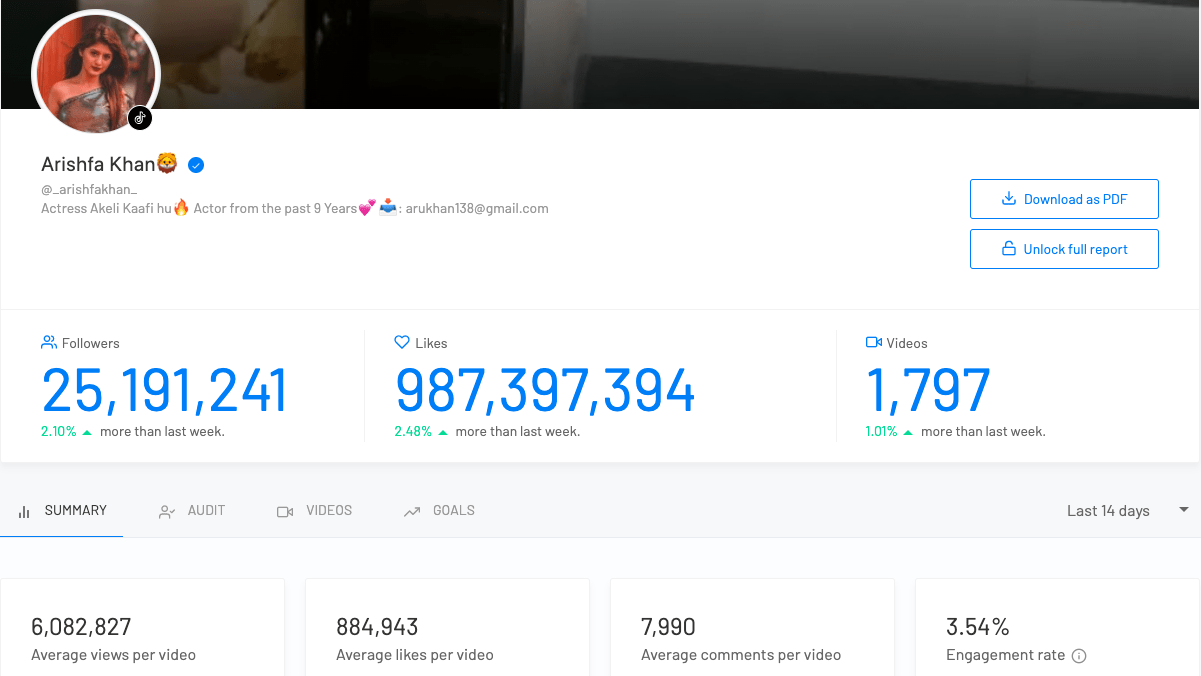 Kristen Hancher is a Canadian actress and social media personality. Being a singer and dancer, she is also well known for her roles in Prime’s comedy series, Mishaps and the Pain of Painting. She regularly posts makeup tips and fashion hacks that her followers dig.

Her TikTok content has earned her a celebrity status at the tender age of 17. 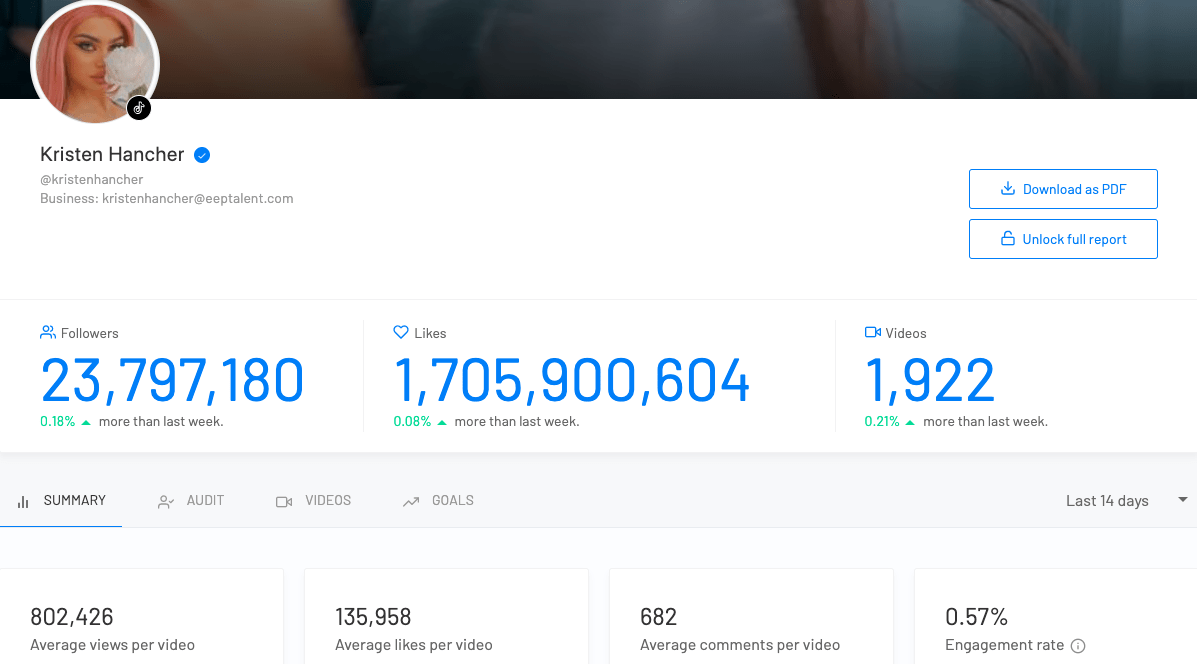 Zach King started his career by posting tutorial videos about the video editing software, Final Cut Pro. Using the software, he created illusion videos that he calls “digital sleight of hand.” Viewers were delighted by videos of him flying on a broomstick and cats fighting with lightsabers.

He’s well-known for his wildly popular “magic videos” where he uploads shorts of himself performing logic-defying magic tricks.

Zach’s first TikTok video showed him escaping from a jail cell. It amassed him a following of 30 million. He has received many awards for his creations, including YouTube’s NextUp Creators Contest and Vidcon Golden Poop Award.

This guy became #1 Breakout Creator of 2019. Zach King is no doubt a rising star.

As you may understand, now his biggest online presence is on TikTok. Where he frequently stars in influencer campaigns. 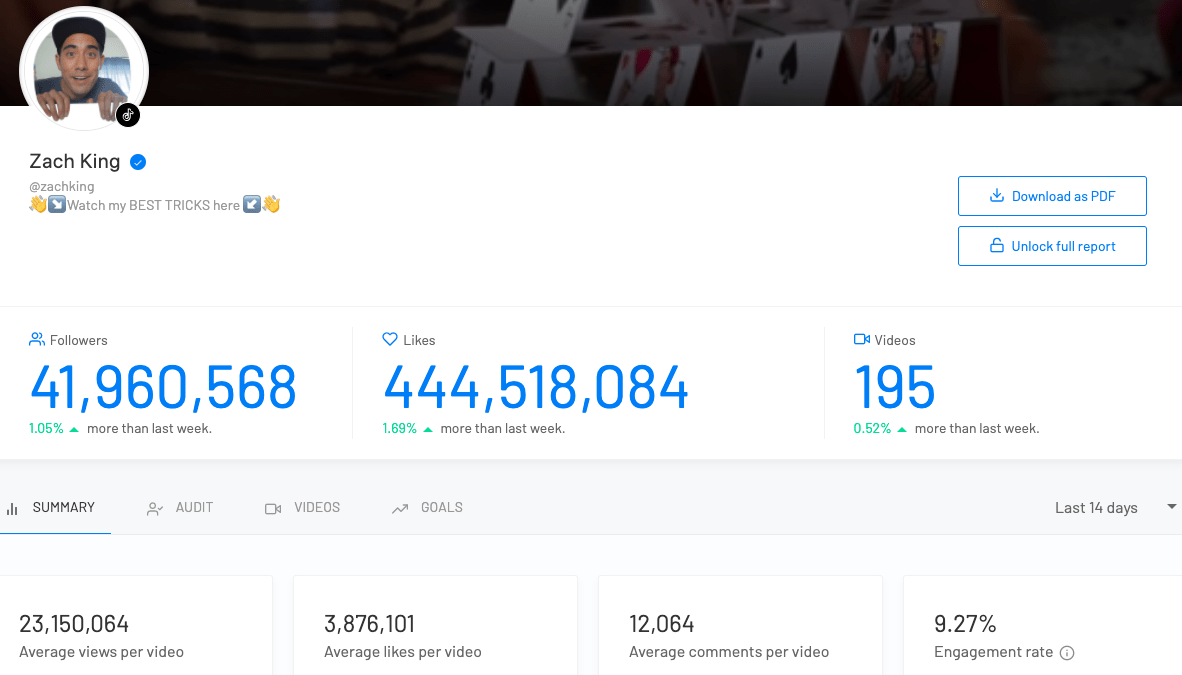 Aly is only 15 years old and he is super popular on several social media platforms. This young man is an Indian actor, influencer, and fashion blogger.

And he is one of the most popular TikTok stars in the world. His videos often go viral through the hashtag challenge #DuetWithRiyaz where he encourages fans and followers to make videos with him.

Aly’s followers love his clean boyish looks and comic talent. His lip-sync and musical videos have catapulted him to social media’s hall of fame and earned him the Crowned Muser title. Spencer X is the stage name for Spencer Knight, a beatboxer who shows off his skills to millions on TikTok.

Unlike some of the stars in this top ten, Spencer didn’t get famous from TikTok. He has more than 1 million subscribers on his Youtube channel where he posts daily content of his mad beatbox skills. 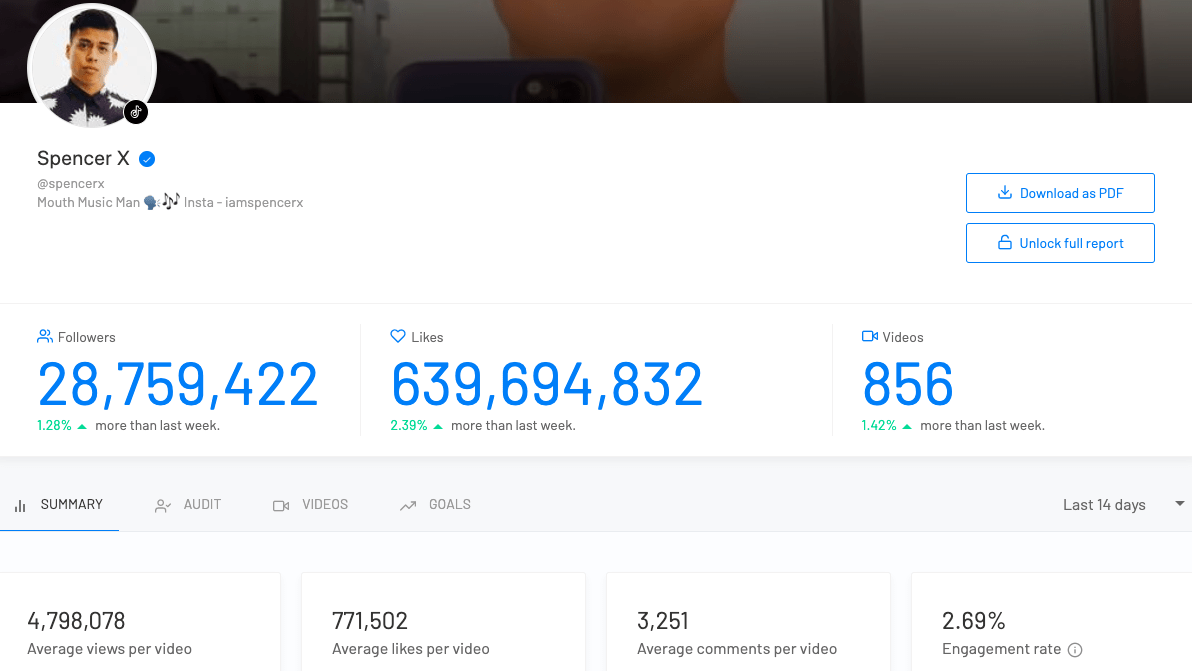 Faisal Shaikh is a fashion influencer on Instagram with more than 11 million followers. In addition to his professional modeling, Faisal works as an actor and social media personality. His videos display his charm and unique talents for attracting a wide and diverse audience across multiple platforms.

Mr. Faisu is part of a squad of Indian creators dubbed Team 07. After he was suspended from TikTok in 2019 for violating its community guidelines, he returned in early 2020 to continue making videos and maintaining his spot as India’s most popular creator. Gil Croes is one of the older stars on TikTok at age 26. He is a social media personality and Arubian actor with several awards to his name. In 2015, he was named Aruba’s Social Media Star and won the Best Male Actor award at the Aruba Short Film Festival. His popularity on TikTok is linked to his unique original characters and short-form film series content that spreads across multiple videos created with his brother, Jayden Croes. 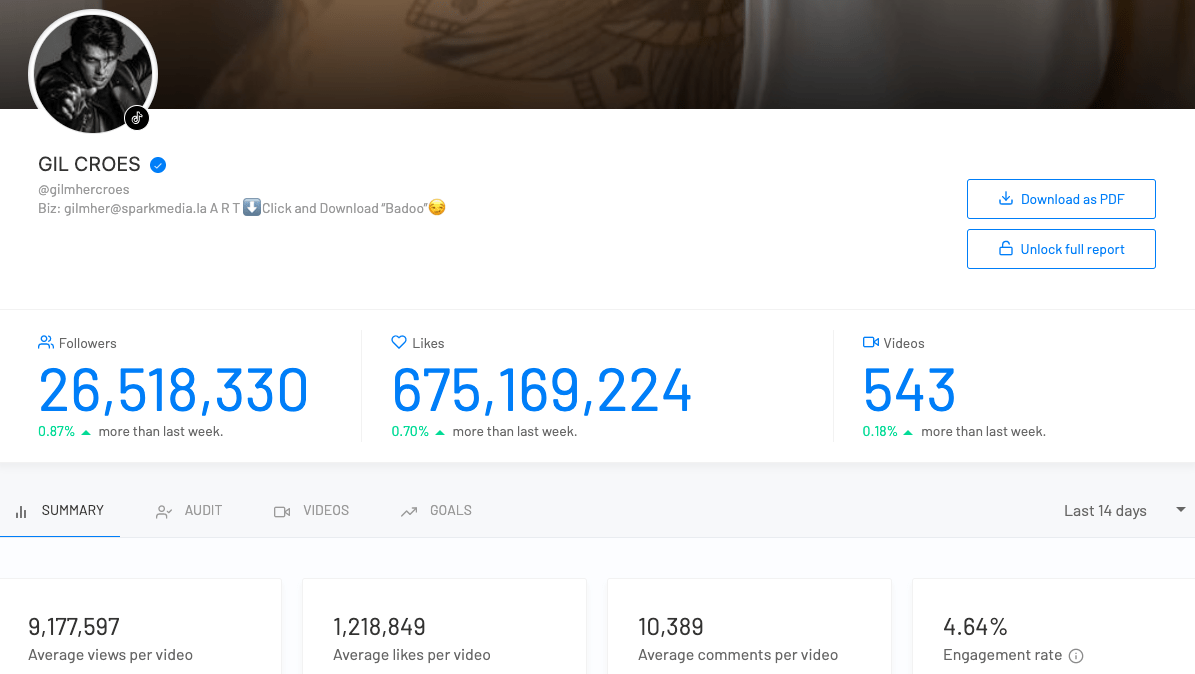 Jay Croes is the younger brother of Gilmer Croes. Together, they own the popular YouTube channel called CroesBros. Jayden’s net worth is estimated to be around $100K USD.

Jayden was listed as a top social media influencer by Express magazine’s influencer edition in 2017. He considers his social media followers as his family and has a “CroesFam” tattoo on his forearm. Unlike YouTube, TikTok doesn’t directly compensate most users for running ads right now. But there are several ways to potentially earn money, including through brand partnerships, selling merchandise, or cross-promoting with other social accounts. TikTokers can also collect virtual donations from fans that can be cashed out for money.

So who are those TikTok stars that make a fortune? Below are the stars that are considered to be among the top earners, based on estimates from Influencer Marketing Hub. Because actual earnings rely on a variety of variables, the numbers may vary.

Gray’s earnings could total $25,580 to $42,633 per post according to Influencer Marketing Hub’s estimates.

The popular prankster and beatboxer Spencer X’s estimated earnings are between $17,228 and $28,713 per post.

What are the most popular Tik Tok trends?

Whether you hope to turn your artist into an overnight sensation, make it to the top of the app charts, or have your clothes worn by young people everywhere, here are a few things you’ll need to keep an eye out for on TikTok in 2022. Here is a list of trends that top TikTok accounts use a lot in their videos:

Memes are used as a popular communication tool amongst Gen Z and can unlock a whole new world for brands who want to become a part of the conversation.

Videos featuring kids and their parents work. Why is this you ask? It could be a whole flurry of reasons. It’s funny, it’s unexpected, kids love the awkwardness of it all, and videos with more than one person are more engaging. Either way, videos with parents or even grandparents featured are all over TikTok — and they’re performing well.

There are a few running themes on what makes TikTok videos become trends. And one of the top themes is humor. Funny videos get more shares, and people watch them more than once, two factors that are important for the feed-ranking algorithm.

Videos that have an element of surprise or something unexpected also have a higher chance of going viral, again feeding into shareability and reach.

Hashtag challenges unite a large part of TikTok’s eclectic content ecosystem. Users record themselves attempting to perform a challenge and often challenge others to do the same.

For You Page (#FORYOUPAGE)

One theory suggests that tagging video content with the hashtags, #ForYouPage, #ForYou, and #fyp can help propel their content onto other users’ For You page, which is where most users discover content that the platform recommends based on previous interactions.

Duet option was introduced in the summer of 2018. It allows users to create custom videos and play them in a split-screen format next to another video of their choice, whether they know them or not. This has lead to an entire culture trend of TikTok users doing duets with friends, celebrities, popular TikTok users, and themselves.

Slow-motion is one of the many effects that users can implement into their videos at the tap of a button. It’s one of the key themes of TikTok’s content and is typically found in more visual content. For example pranks, stunts, dance moves; all of which lend well to slow-motion effects.

How to get famous on TikTok

TikTokkers take trends and put their own spin on them, while the linked music and hashtags are the common thread pulling the remixes together. Overall, what works on TikTok are concepts that people can easily recreate which have an element of fun, surprise, and a track that is both catchy and of-the-moment.

If you are a TikTok creator who would like to be on the top list, check our article where we have shortlisted the main recommendations for you to follow.

After getting an idea of who are those young and popular boys and girls who publish most viewed TikTok videos, you might be a bit surprised.

Well, nowadays anyone can become famous and rich in a day, you can be creative and think outside the box.

So next time add some trending sounds and hashtag challenges to your homemade videos before you share them on the platform. And who knows, maybe you will join those top influencers that we mentioned earlier. Best TikTok filters to Use in 2022 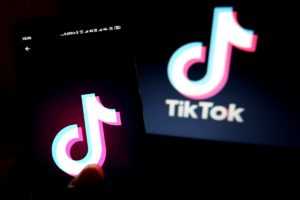 How to Download Tiktok Videos on PC and Phone Best Hashtags for TikTok to Get on the ForYou Page