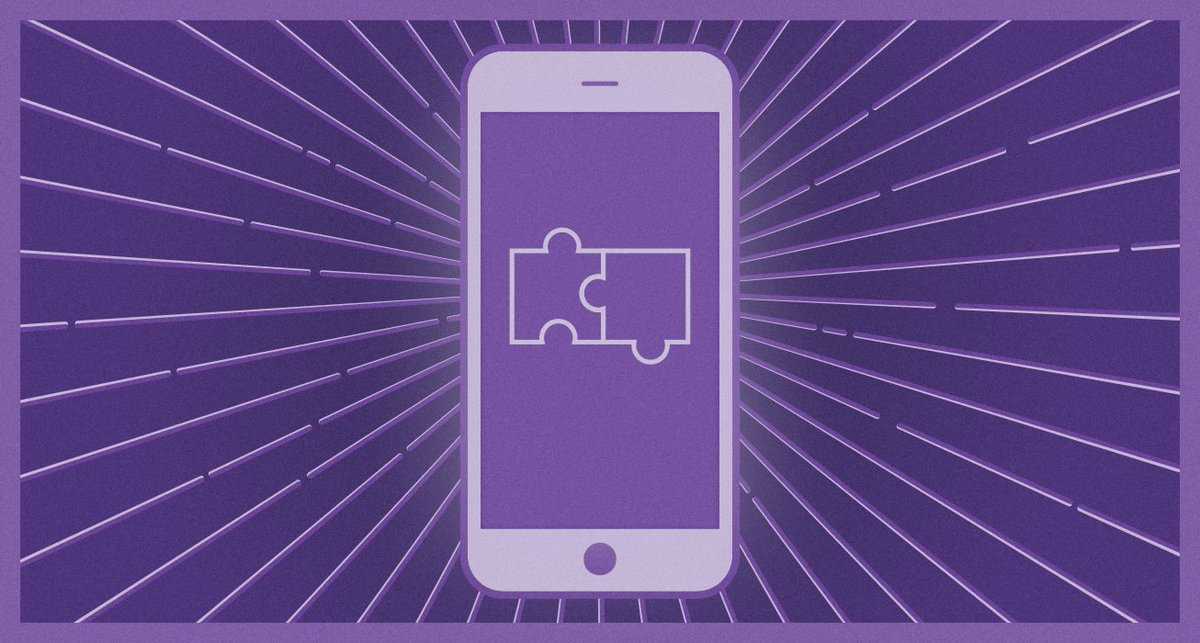 Would you agree that engagement, interaction, and surprise make watching video streams on Twitch much more exciting? Undoubtedly, it is so, but not everyone knows that this effect is achieved due to the use of the best Twitch extensions.

You may wonder why some streamers are more successful than others despite the fact that they show similar streams. The answer is they are better at engaging with their audience. When you’ve built a small but very active core community around your stream – the viewership just snowballs with every news broadcast.
The main way to get this loyal community is to stream regularly and make a stream quality truly professional and use special tools (extensions) to keep viewers excited.

This article will focus on the best Twitch extensions for new streamers, which can help them to attract more viewers and engage them on the channel.

What are Twitch Extensions 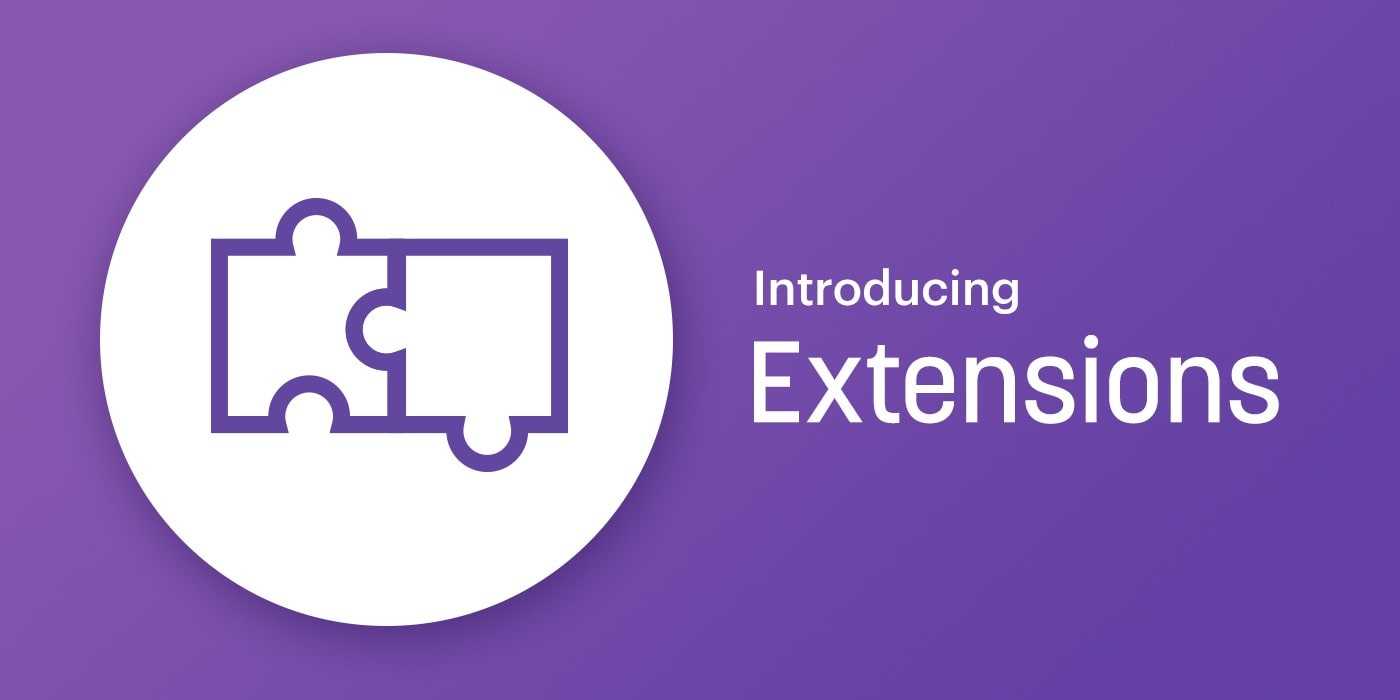 The term ‘extensions’ was introduced by Twitch in 2017 when the platform decided to provide viewers with a new world of fun in addition to streams. In fact, Twitch Extensions are interactive panels and overlays which contribute to the interaction between a streamer and viewers as well as improve engagement on the channel.

Nowadays, there are over 200 different extensions which are mostly developed by 3rd party services. These extensions were available only in the desktop version of the channel, but now they are viewed well on mobile devices too.

When extensions were introduced only, it was possible to select only one extension for a stream, but now it is possible to run up to 3 examples simultaneously with a stream and 3 extensions below the video.

The main reason why these extensions were created is the improvement of viewing experience and getting feedback from users on the quality of streams.

Twitch has a Discovery page which offers a division of extensions into several types. The first division is made on the basis of the goal performed by the extension:

At the same time, there are also packages of extensions by types. They are divided into:

Why Should You Use Twitch Extensions?

The main reasons for using Twitch plugins are quite simple and obvious. The process of watching live broadcasting can get a little boring in some time, so it is important to keep your viewers interested in any other way. It is exactly the thing Twitch extensions do on the channel. They can be used for the following goals:

All these functions of extensions contribute to the popularity of your channel attracting new viewers and encouraging existing users to make their donations. Consequently, they are a powerful marketing tool to promote your channel to assess and keep your current viewers interested and engaged.

If you have recently joined or plan to join the Twitch platform as a streamer, you should look for effective ways how to attract more viewers and make them regular visitors to your channel. The following essential extensions may help you with these goals and benefit your channel in other ways too.

StreamLabs cannot be referred to as one type of extensions since this is a system that includes multiple widgets. What is interesting, StreamLabs had appeared earlier than Twitch launched its extensions, however, this all-in-one tool began to offer downloadable widgets which can be used as extensions. There are widgets for Alertbox, Chatbox, Event List, The Jar, Donation, Ticker, Donation Goal, Guilds, Loyalty and All-Stars.

A recent release from the company is an application called StreamLabs OBS. It is a streaming app with multiple additional features for streamers with similar widgets.

Do you want to make your viewers’ experience unique and your stream more unpredictable? Crowd Control is the most useful tool in this case since it allows viewers to influence the gameplay of the streamer helping or preparing obstacles for him or her. It is a perfect chance to make gaming interactive and even earn from such involvement.

Viewers can exchange their Twitch bits for coins and buy and activate certain items or skills that will influence the main hero. Every exchange of one bit on the channel brings 20 cents to the streamer. Naturally, not all games support Crowd Control but the developer community is incessantly extending the list of games to make it more exciting. 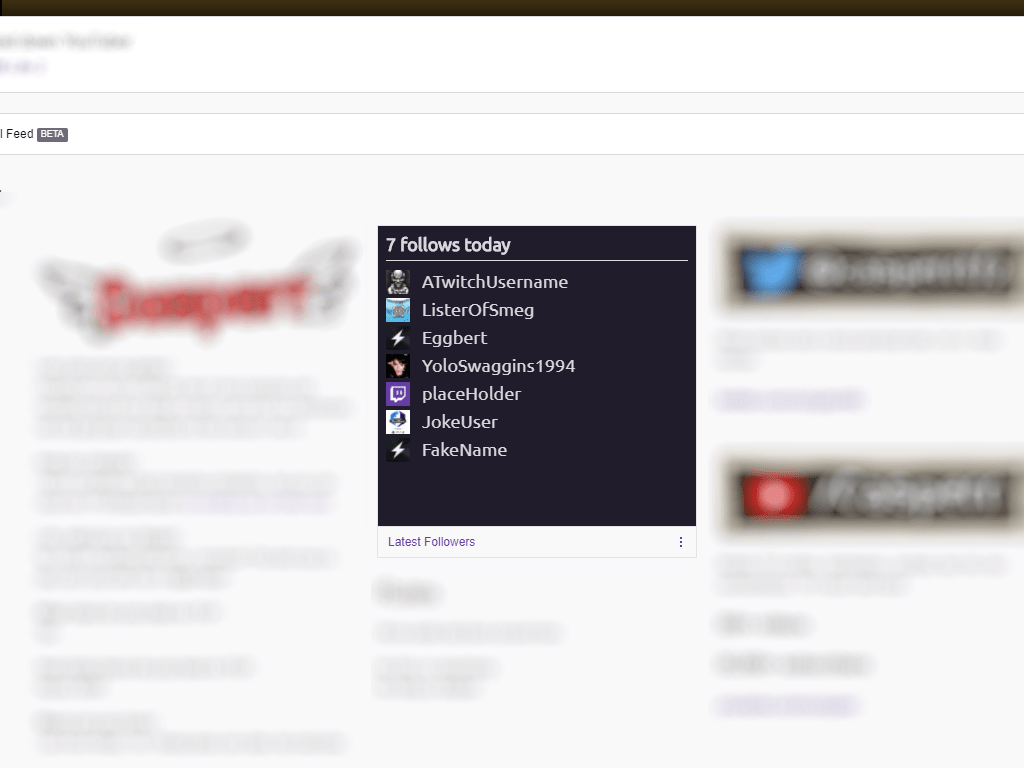 Many streamers want to award their devoted viewers with several minutes of fame. Latest Followers extension is a great way to do that without much effort. It lists the screen names and profile images of the latest viewers indicating viewers who do that in real time. It also provides information on the total number of followers during the day and the time of their arrival. The information provided by the extension is refreshed every minute and displayed on the dashboard, but the number of followers listed is limited to 100 to prevent computer lags. 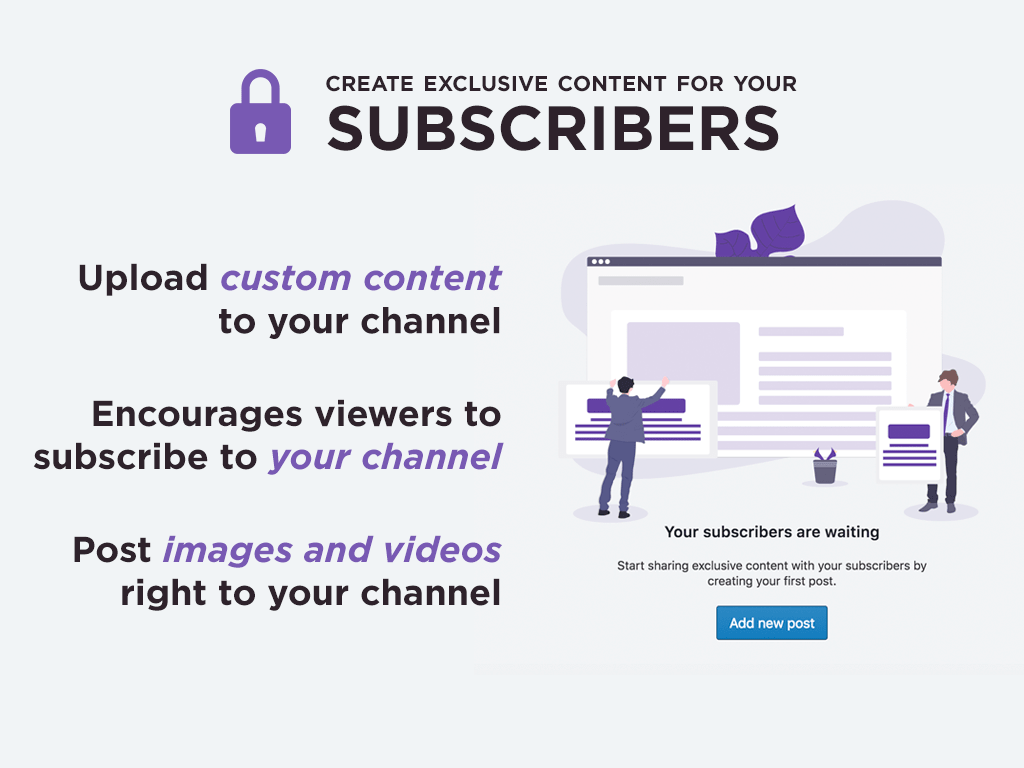 Sometimes it is necessary to hook up viewers to convince them in the necessity of subscription. Using an extension called Exclusive Content for Subscribers may help newbie streamers to attract more subscribers. How does it work? A streamer can create unique content using a content builder provided on the platform and allow only members of the channel to watch. Others who are interested in what is hidden for subscribers will see a message which will encourage them to subscribe to get access to this content. Moreover, this extension adds a message to the chat each time you add your unique content for subs, so everyone will see an invitation to visit the panel. 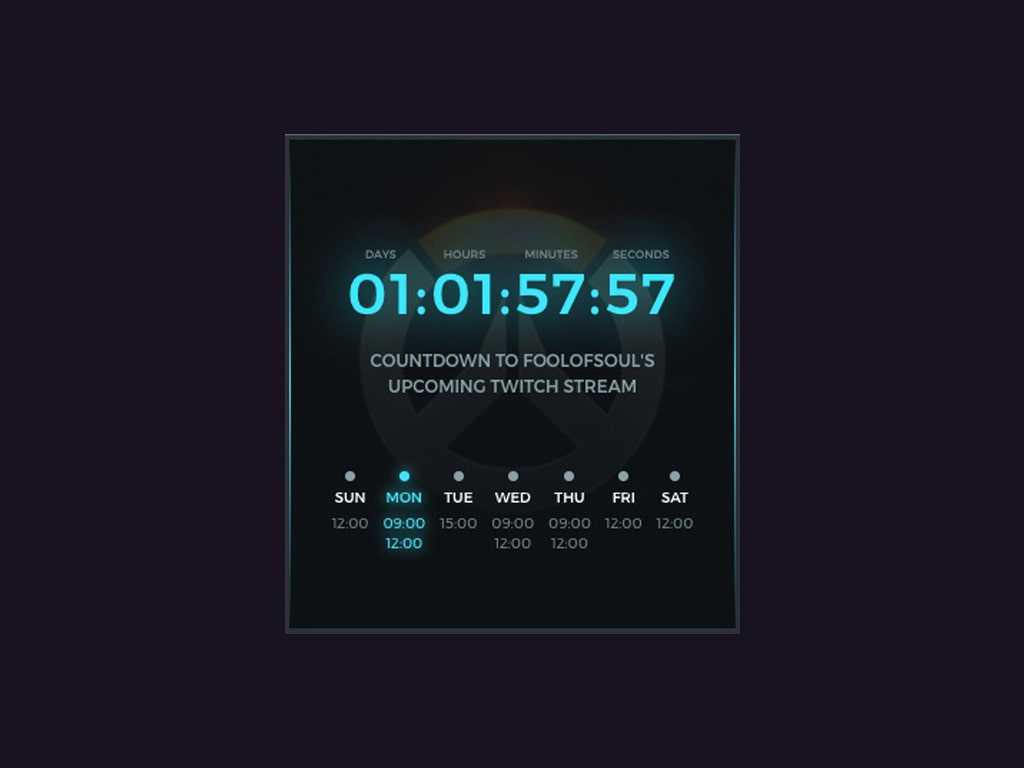 It is not surprising that viewers are always waiting for the new streams of their favorite broadcasters. However, sometimes it may be difficult to remember the day and time of the live stream, so it is possible to help them by installing an extension called Streamlabs Stream Schedule & Countdown. It is incredibly popular with experienced streamers who have a big number of viewers. The last ones can enter their favorite channel anytime and see a panel which indicates a day of the week and the countdown time left till the next stream. It is especially comfortable if you take a break but do not want to lose your viewers. It is possible to indicate the return time and be confident that your audience will stick to the screen too. 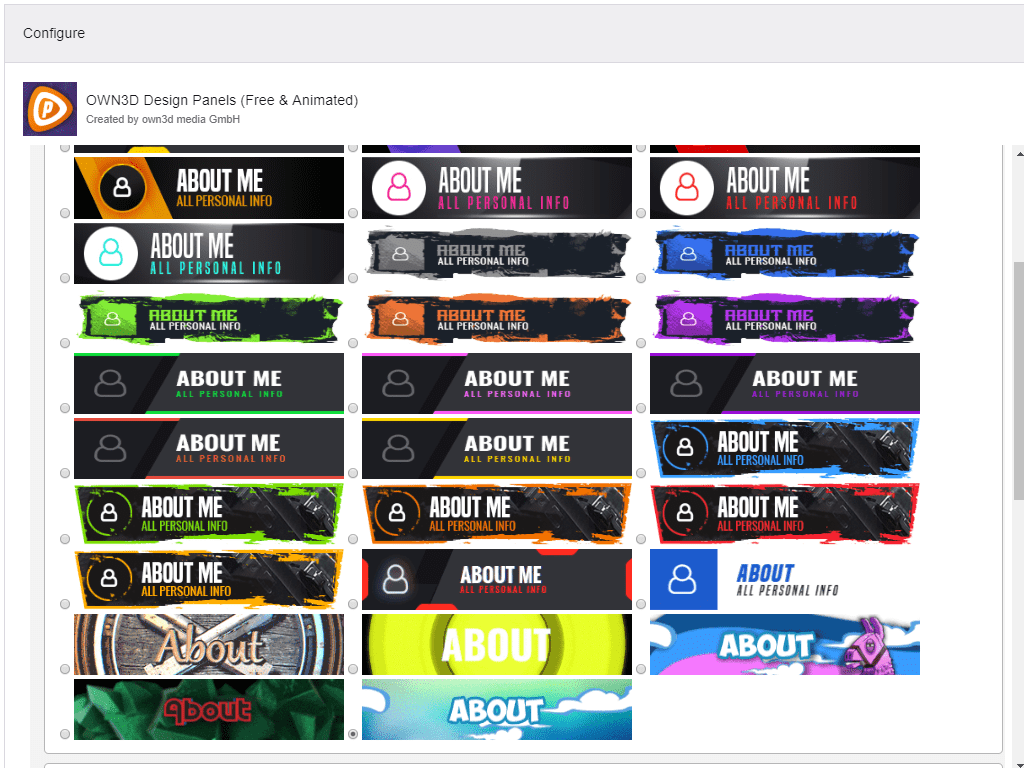 What do viewers see first of all when they open a channel? It is not a video stream, it is the page design – how streamers care about their creations. Every person knows about the importance of the first impression, and it is especially vital for new streamers. Since viewers do not know what a broadcaster this person is, they check the channel: its design, account image, logo, and an offline screen. Not memorable channels can be left forever and never returned to. This Twitch extension has been created especially for making a channel page bright and attractive. It offers an opportunity to use animated panels and is constantly updated offering new and new approaches to the channel design. 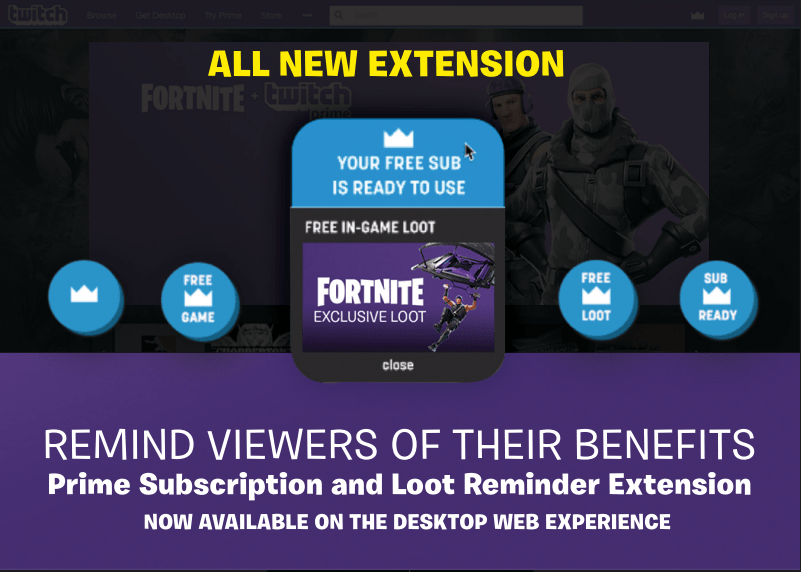 Why is this extension so popular with viewers? The reason is the benefit they can get. Prime Subscription and Loot Reminder send notifications about the availability of a new Twitch prime channel subscription. However, it is only one of the extension features, because it also allows claiming a Twitch Prime Loot. Moreover, viewers who do not have a Twitch Prime Sub can click the crown icon to learn how to get this free benefit. However, there is also an alternative to this extension from Google Chrome called Mozilla Firefox extension, so you can set up it too.

Sometimes when you watch a video stream for a long period of time, you get tired and want to have some fun without pausing a video stream. A broadcaster can give such an opportunity to his viewers by installing a Snap Camera extension – users can unlock lenses which are used by streamer and activate them to make broadcasting more colorful and exciting. It can be a kind of gratitude for subscription, as a streamer can provide every sub Tier with a separate lens or give access to lenses to all viewers.

Despite the fact that this extension was released only in 2019, it has already gained thousands of fans. Users who follow some Twitch channels have loved the way how they can express their emotions and attitude to the stream. Thanks to multiple small Twitch emotes which appear on the video stream streams get more spectacular and funny. The extension is customizable, so you can choose not only emotes which you like to see over the stream but also a cooldown time, position, size, and other features.

One more great extension appreciated by thousands of viewers is Sound Alerts. This extension offers viewers to play different sound effects from the existing library. It can be done for bits, so users can be rewarded with badges and be listed in the leaderboard if there is one. Moreover, it is one more simple way of monetization for streamers and fun for viewers.

How to Use Twitch Extensions 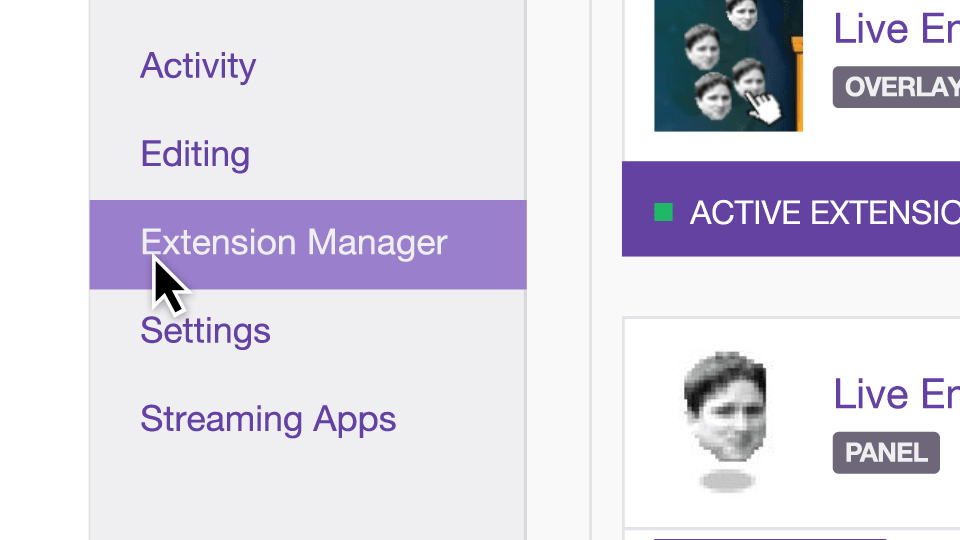 When you open the Extension Manager on the dashboard, select the Discovery tab to learn which extensions you can set up. You will see many different categories to choose from, so you can select any on the basis of its title, features, and developer. The extension hover will also open access to the description, details button, and install button.

When you find a necessary extension, press the ‘Install’ button to start the setup. After the installation, you will see a window about its successful completion and two buttons: ‘Continue Browsing’ and ‘Configure’. The difference between them is a possibility to postpone configurations for later or complete them right now.

The configuration flow differs depending on the extension you choose, so do not neglect reading the information during the process.

When you complete the configuration, it is necessary to activate the extension for it to be shown on your channel. This process can be completed if you go to ‘My Extensions’ tab on the Manager page and click ‘Activate’ button.

It is possible to activate up to 6 extensions for Twitch at a time including 3 panel, 1 overlay, and 2 component examples.

If one or another extension does not meet your expectations or you just want to substitute it for another one, it is necessary to deactivate it in ‘My Extensions’ tab. One more piece of advice from experts is to change some extensions with time offering viewers new ways of entertainment and interaction as well as find out what is perceived by the public the best. It will help a new streamer to analyze the statistics and understand what is required for better results.

It is natural that every new streamer has its own idea of the channel he or she would like to have. That is why every list of top extensions is unique for every streamer. At the same time, we tried to pay the attention of young streamers to the extensions which are used by the most successful streamers and display how they help broadcasters to achieve success in their activity. 9 Best CPUs for Streaming and Gaming 2020 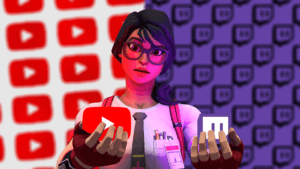 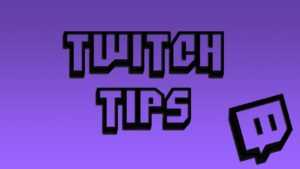